I am far from being a petrol head, and even virtual driving doesn't resonate much. Colin McRae Rally 2.0 for PlayStation was an exception. Schoolmates were talking about the game and its great gameplay, music and graphics. Colin McRae Rally sounded like a perfect driving game.

The best part was that there were stages from my homeland, Finland! It's always a big deal if a movie is being filmed here, or a pop star is having a show. For me, the thought that someone has modelled Finnish forests and created a virtual playground of my homeland was exciting news. One of the tracks was close to where I was living: Kuopio.

After hearing praises, I had to buy the game and rushed back to home. After going to through a polished and minimalistic menu system and I finally reached country and track selection. Then I see this.. 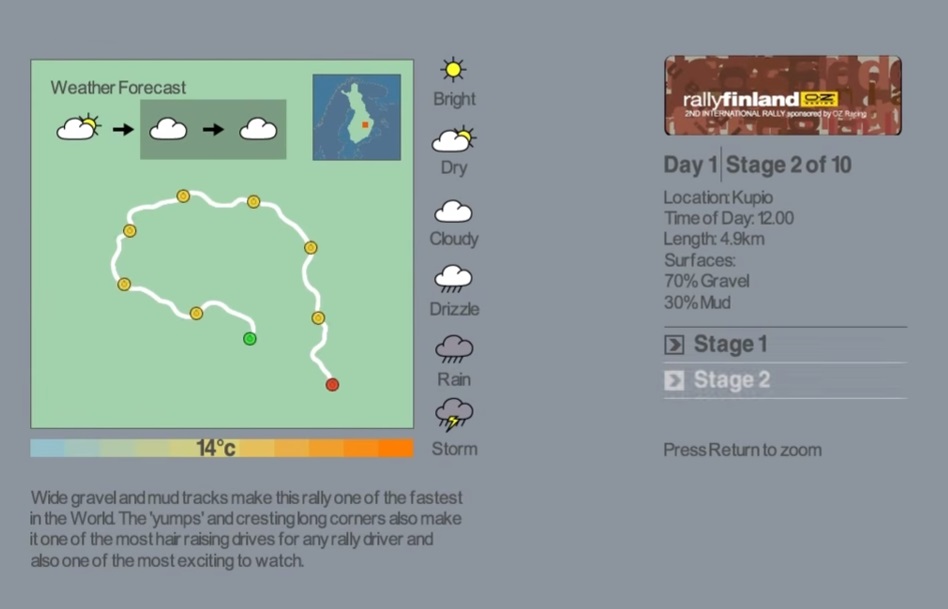 You're probably wondering, there's nothing wrong in the picture..

Look at the location. Finally, we got a small city from Finland to a commercially successful game, and the game creators misspelled the city name!

Why this kind of misspellings is easy to miss

Colin McRae Rally had support for multiple languages, and I'm pretty sure that there weren't many misspellings in localization files. Those are pretty easy to check by a peer translator, beta testers who speak that language, etc.

Location name is not something that is in the localization file; it's pure data in a similar fashion as a length of the stage. It's pretty easy for me to say which word is a real Finnish word, but verifying that district name Bukhit Bintan is correctly written requires research.

In theory, there could be an automatic way to validate given data. Not just test that given text is an array of characters, but a valid location. The problem is that slight misspelling might be a real place on Earth, for example, Kerava is a city in Finland and Kerala is a state in India.

By the way: it's Bukit Bintang.

Hi there! I'm Tatu, an independent Web developer; I help clients on building successful SaaS products. If you're interested in freelancing, you should check my email list How to get started as a freelancer. In my email list, I share private learnings from my own journey, including information about pricing, finding clients, working with the clients, how to get started, etc. Please don't hesitate to reach out by sending an email or via Twitter.